After many delays and about 15 hours in transit, I finally managed to land and locate my hostel successfully. It was a triumph, you guys! The directions I was given were so incredibly precise (walk 10km over this bridge until you reach a canal…fly over the canal for 5km). They weren’t quite that crazy but I didn’t feel lost once! I quickly noticed the street names are often printed on the side of the wall and street signs seem to be non existent so after taking a city bus, a water bus and walking about 20 minutes, I reached a huge green door and asked a very nice waiter if he was able to help me get inside.

Then there were the stairs. I walked up about 5 flights (which felt more like 10 because at that point, no matter what was in my backpack, it felt like a million pounds) and was greeted by a really friendly, blonde Italian woman who treated me like a true house guest instantly. I’m almost certain that this will be the nicest hostel I ever stay in so I’m going to enjoy the luxury while I can! The view is beautiful, the beds are clean…it’s more than I could ever ask for.

My bedroom window view
Immediately, I was greeted by 4 people around my age who were staying in two of the rooms. It wasn’t long before we introduced ourselves, decided to split a gondola ride and the rest as they say, is history. Lucy, Anna, Heather and Will. They all just happen to be from London except for Anna who was raised in Los Angeles and Hawaii (how cool is that?). 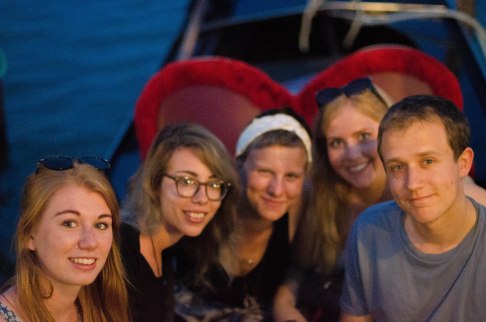 Our gondola ride was beautiful and a super introduction to the city. Venice really is like they portray it to be in the movies. People really are singing, riding boats and yelling from the windows. Hollywood, you didn’t let me down! On top of that, the architecture is phenomenal. Every single piece of this city has a history attached to it, you can just feel it in the air. I was also quite surprised to see how high the water level could reach. During our ride, our gondolier showed us the mark on the wall that indicated the highest tide that climbs to reach that point about 3 times per year! How do you even prepare for that?

We were disappointed to hear that singing on the ride cost an extra 30 euros (they squeeze in an extra cost wherever they can), so we provided it. Well, our gondolier was nice enough to join us and attempt to sing That’s Amoré so it’s the thought that counts!

After our ride, we stopped at a restaurant along the canal and I treated myself to pasta and wine as we learned about each others lives. We turned out to be quite the eclectic group. Heather is in her third year at med school, Lucy is studying human biology, Will graduated from with what I think he said was a degree in Geography but took a job in financing and Anna is similar to me. She took a semester of school and left, taking a job in Los Angeles and of course, traveled. We spent most of the time exchanging our best Canadian and British accent imitations which I found hilarious. Something I know I’ll have to get used to is saying goodbye. All of them are leaving tomorrow so our time together was short. Social media will be my saving grace.

After one of the hottest sleeps of my life that only jet leg could help ignore, I already find myself on my second day. I knew time would go by extra quickly over my time away. All I can do is continue to savour every moment possible!

Today I will be setting off to photograph and plan to go to Lido di Venezia to visit the beach!

One thought on “That’s Amoré”