By now, most of you know the answer to that question but over the past few months it had been a difficult answer for even me to give. It was always laced with maybes and sort ofs and some ways. I knew that I wanted to get to New York City but I didn’t know how. I was embarrassed that my plans had fallen through and I was hesitant to talk about new ones. Lingering in my stomach and stirring around in my heart, I had a gut feeling that I would find myself here regardless and it was primitive that I never give up on that. 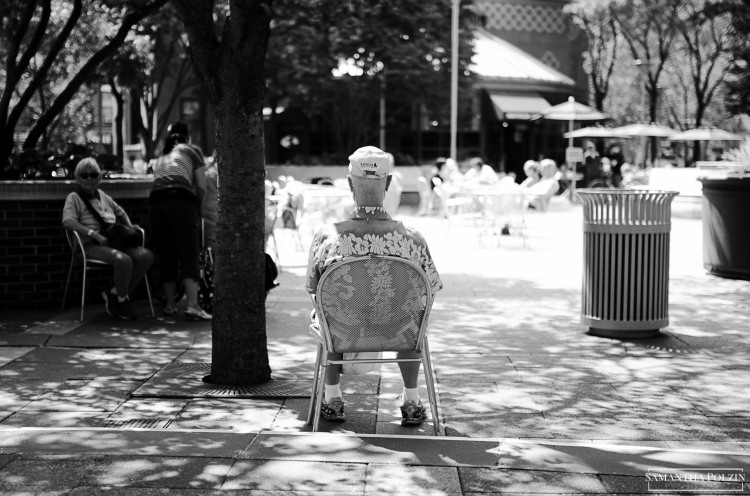 I won’t sugar coat what happened involving my opportunity to attend SVA but I won’t drag it out into a sob story either. Point blank: money foiled that plan. The good news is, money didn’t foil my plan. It didn’t stop me from becoming (continuing to be) a photojournalist, a documentary photographer or an artist. Money issues nudged their way into this particular path but they did not get in the way of the bigger picture and I wasn’t going to let them convince me they had. I think it’s important to remember that there are so many different paths we can take to reach our dreams. It’s super easy to get caught up in one idea and let the possible failure of it drag you straight to the ground. The world is complex and we as people are far more resilient than we believe. Find another way! There is always another way. When one door closes, build a new one.

I find myself in a Bed-Stuy, Brooklyn cafe. Twinkle lights are hung above me, I’m sipping a matcha sunrise on ice and devouring a maple glazed piece of vegan banana bread. It’s a moment that gives me a glimpse into what my life could be like if I moved here one day. It feels so wonderful to just take my time and blend into the city like I’ve lived here forever.

Tomorrow, I meet with a well established fashion and lifestyle photographer named Christina Shields. I will be spending some time volunteering and shadowing her while I get to know the ropes of her business as a freelance artist. This opportunity came out of nowhere and pieced together so flawlessly as if it was just waiting for me to come along and grab ahold of it. I’m curious and excited to see what my time with her will be like and what it will bring me. In the meantime and the moments in-between, I have my camera out and ready 24/7. This city is like a canvas. There is inspiration every step and it never fails to instill fire in my veins, I swear. I feel like a superhero here. 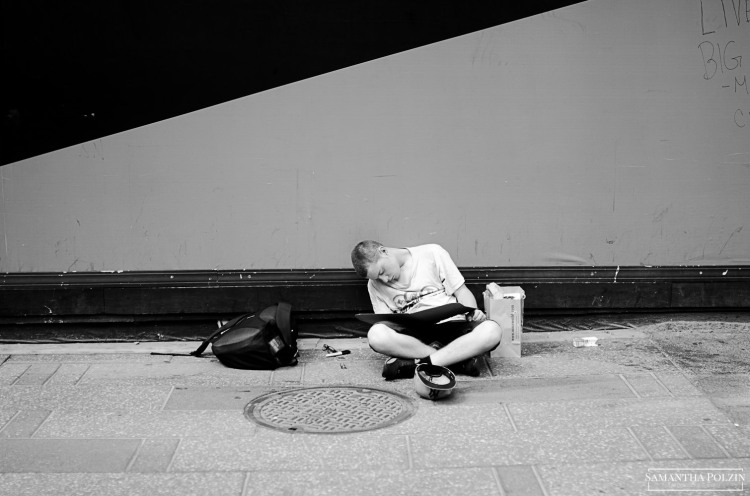 I want to try and make my future blogs less narrative of my day-to-day activities and focused more on my observations and lessons. I’m working on developing a new voice for my writing and a different perspective for my photography. These things will take time but bear with me and enjoy the ride! 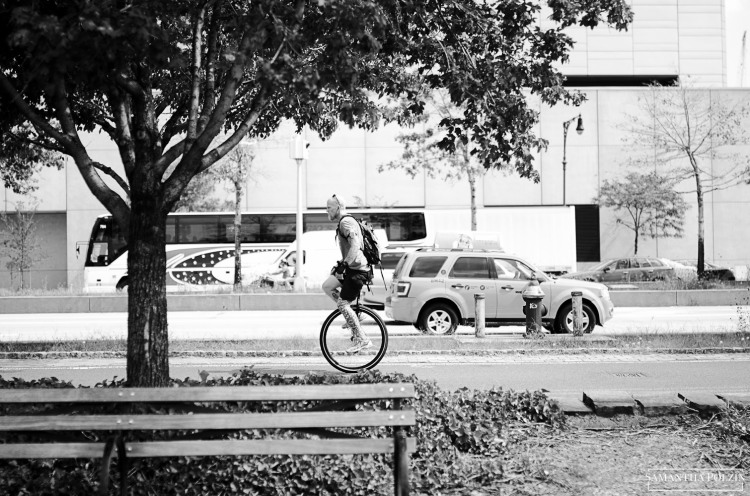 This man was writing in Russian with a sign that said “I write about you. Maybe you could help me?” He didn’t tell me his name but he did tell me he writes about the System. He was very passionate and beside each entry, he wrote the amount of money he was given from a passerby and a little passage about his perception of them. I’ll never know what he wrote about me… 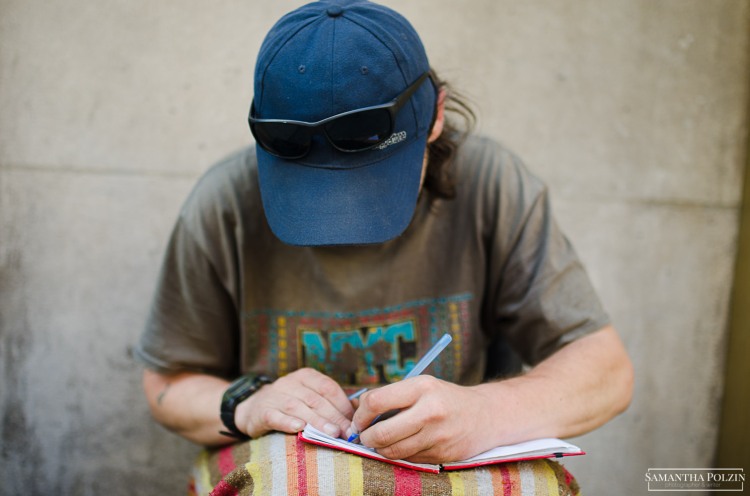 Louie  stopped me seconds after I spoke to the Russian writer. He was carrying a camera and asked if I had taken any good shots that day. We sat on a  stoop and talked about our favourite captured moments, what we loved about photography and the reason he purchased a camera to begin with. Louie has a lung condition that at one point prevented him from walking. By “the grace of God”, he said, he was able to move again but at a much slower pace. He took up photography so that he could have a motivation to continue walking. I thought that was simply beautiful.

After spending some quiet time in Madison Square Park, I was stopped yet again by a man named Frank Weston. He noticed my camera (a massive source of attention apparently), and called me over. He said that he loved my energy and that he had been talking to the man who was standing beside him for three hours. This man was a photographer by hobby and stood there very quietly as Frank and I shared an extremely diverse conversation. Frank is a man of many trades.  He studied at NYU in many departments but specialized in Geology. He has written and produced a movie in NYC with a-list actors and written a book called “Do You Have a Return Ticket?” depicting African history vividly and brilliantly (at least, this is what I assume after meeting him). One of the most important things he said to me was that my photos needed to represent the change and gentrification happening in my area of Brooklyn. “There is a cultural and societal shift happening right now and if your photos don’t show that change 20 or 30 years down the road, people are going to wonder what went wrong.” Before we parted, he reached into his sock and pulled out a small plastic case. It held several little rocks and gems. He gave me a little sapphire stone as a memory of our meeting and I went on my way.

These three individuals aren’t the only people I met that day. In one single day, I spoke candidly to six different people. I met a future Broadway star, a homeless woman who desperately needed me to assure her she wasn’t a bad mother and a man who sold selfie sticks in Times Square who came here with nothing and rose to the top. Some of them I knew immediately wouldn’t want to be photographed so I just listened and absorbed what they had to say. It blew my mind but reminded me why I love to travel.  I hadn’t forgotten, I just needed a little wake up call. 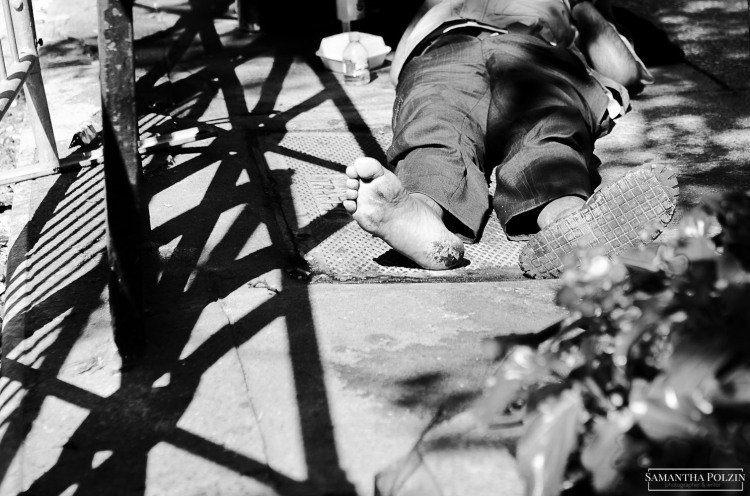 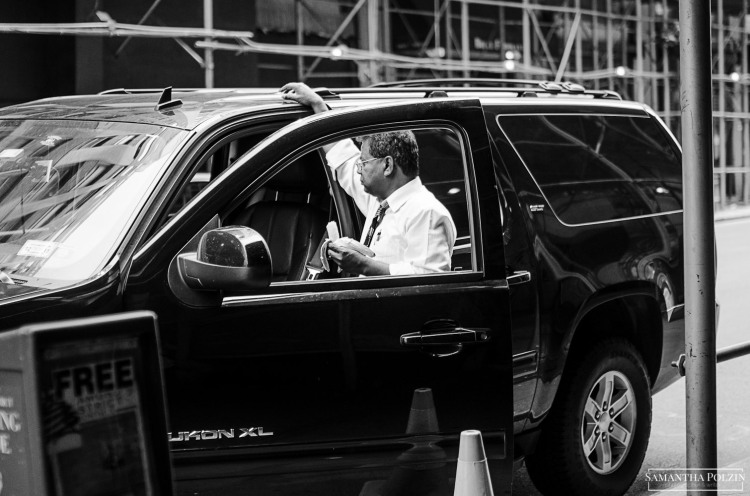 *Shout out to the newest addition of my lens family. The Sigma 35mm 1.4 Art lens is highly recommended.